Maybe it’s because we just went through all the hassle of moving, but the opening lines of this poem by Andrea Cohen struck me with the force of a brass fanfare:

If we’d moved her,
she’d still have ’em,

the ad for Acme
Moving says, with a photo

of Venus de Milo.
But who, intact,

would Venus be?
Some standard-issue

ingénue. Give me
a woman who’s lived

a little, who’s wrapped
her arms around the ages

and come up lacking: that’s
the stone that can move me.

And that’s the TRUTH — as these photographic manipulations make very clear:

and then there’s this, more interesting perhaps, but still hardly OUR Venus de Milo: 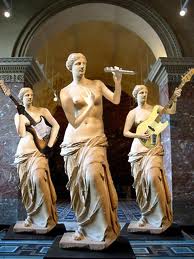 The Arms of Venus Trio

So be careful what you wish for! Or maybe, Sometimes Less is More —

4 Responses to Truth in Advertising —