(I must have been in some kind of late night stupor (NOT induced by beer) when I posted this on T2T instead of on its sister blog.  A new post — about a milder beverage altogether — will replace this one shortly. But I’m not above taking advantage of possible serendipity from my own mistakes, so if you don’t know A View from the Woods, wander on over and — enjoy the View!)

Are windows to see through? To see in? To see out?  Not necessarily. These windows are to sell through: windows as sales tools! 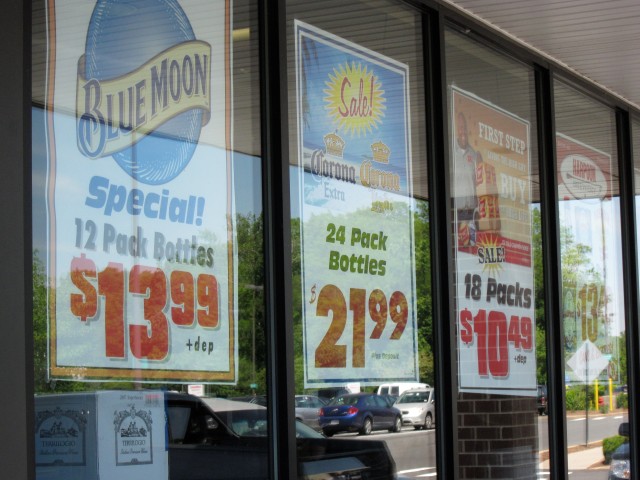 As often when I go to the liquor store, a question arises in my mind, a snatch of poetry from long ago:

And much as Wine has played the Infidel,

And robbed me of my Robe of Honor Well,

I often wonder what the Vintners buy

One half so precious as the stuff they sell.

Or, as humor columnist Dave Barry has said, less poetically but just as pointedly:

Without question, the greatest invention in the history of mankind is beer. Oh, I grant you that the wheel was also a fine invention, but the wheel does not go nearly as well with pizza.