A Hedgehog — and a Goldfish 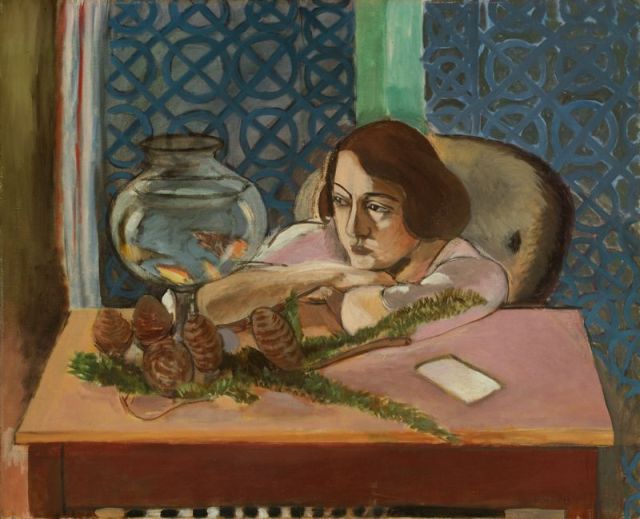 Expression, for me, does not reside in passions glowing in a human face or manifested by violent movement. The entire arrangement of my picture is expressive; the place occupied by the figures, the empty spaces around them, the proportions, everything has its share.

There is great stillness here, rather than movement; and the woman’s expression is unfathomable, rather than passionate. Yes, the design, the management of space, is all.

And yet — is it? Would I agree with Matisse that there is no emotion? Perhaps I’m biased. I recently saw the French film The Hedgehog, based on the novel by Muriel Barbery, The Elegance of the Hedgehog. I loved the book, and I loved the film, although they were two completely different experiences. But both touch on life and death, alienation and intimacy, frivolity and the life of the mind — and so much more. Both are slow, haunting, and moving. You either like that sort of film, or you don’t, and I do.

Why do I couple this quote with this image? Because a goldfish in a bowl is both a motif of the film and an important character (in its way!). In an important scene the recurring goldfish in its bowl is watched by a young girl, and in another scene, watched by an older woman,  who looks (to my eye, at least) amazingly like the woman in the painting. When I got home and googled Woman and Goldfish Bowl, there it was — exactly the scene from the film. For me, then, the painting is indelibly infused with the quietly intense emotion of those moments.

I don’t know for sure, of course, and never will. But I am convinced that someone involved in the making of the movie also had this image in mind. For Matisse, the design may have been all, but for us, viewers, we bring to it much much more.

27 Responses to A Hedgehog — and a Goldfish