Well, now you know where to park when you’re ready to explore Northampton’s downtown. But not just yet.

I’m your guide, and so instead we’re going to take a detour around the corner from the Parking Garage and ascend to what I think is the most important building in town. Which is the Forbes Public Library, built in 1894 of massive chunks of textured stone in a ruggedly romantic style called Richardsonian Romanesque.

The donor of the library, Northampton lawyer and judge Charles Edward Forbes, had two main preoccupations in making his bequest. First, that the public be enlightened, and next, that the building be fireproof. Accordingly, everything structurally that isn’t stone is metal, including the roof. For further fireproofing, the building was sited up on a knoll away from anything else around it, so that one  familiar name for it is The Castle on the Hill. 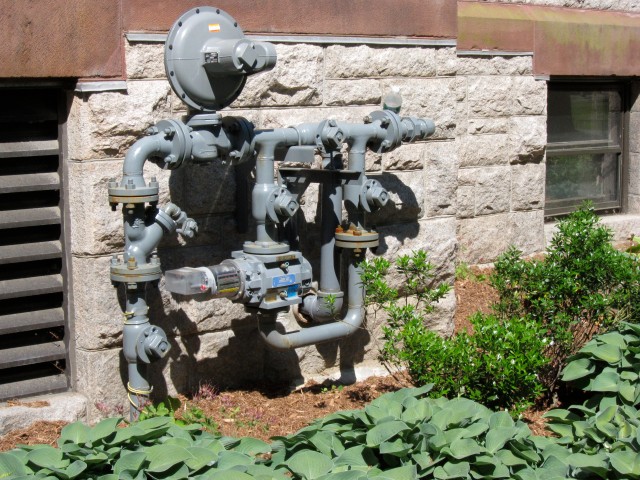 Above you can see the massive stones against which even this alien creature’s ray gun makes no headway. You don’t see the alien? You have a more sober imagination than I do. You’ll surely rate a nod of approval from Judge Forbes, who declared this goal for his library: 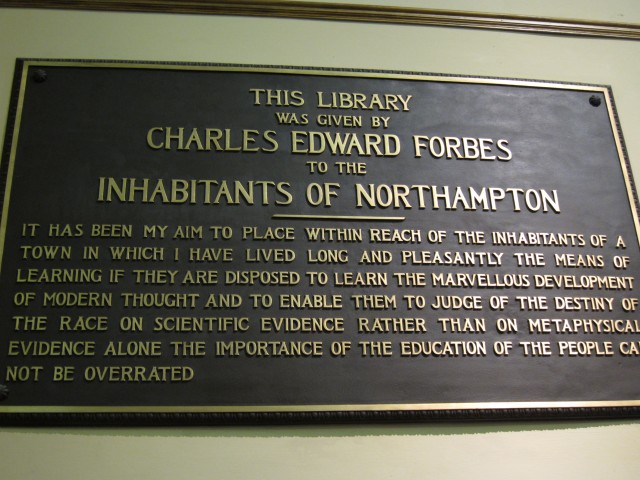 A great library with a vast collection of books, across the street from prestigious Smith College (founded even earlier, in 1871), and located in the Pioneer Valley, home of the Five Colleges, in what is sometimes called the Knowledge Corridor —The Forbes is emblematic of Northampton, which is why I’ve taken you here first.

When you enter the building, you’re back at the turn of the 20th century — 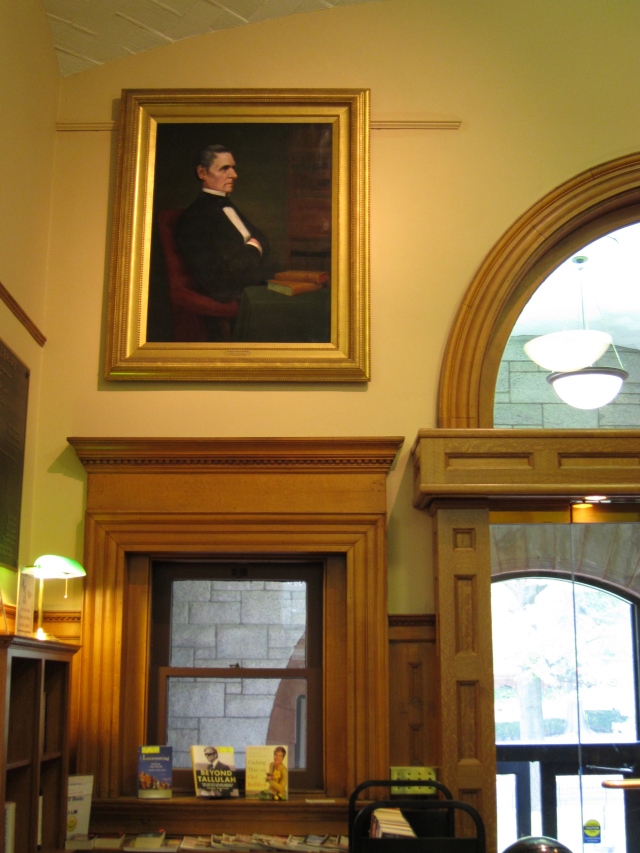 — and the plaque on the right wall as you enter is the second thing to strike your eye. The first is the bronze bust on a pedestal of Judge Forbes himself: 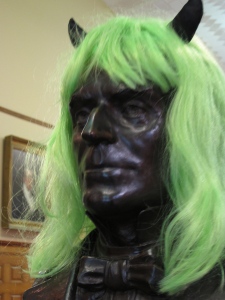 Oh, I forgot to mention, this is Hallowe’en! The first time I ever walked into the Forbes, it was summer, and the judge was wearing a baseball cap and a backpack. But whatever he’s wearing, he has impressive dignity. He’s remembered as being reserved, perhaps even somewhat starchy, and yet I’m sure these affectionate tributes don’t displease him. They’re tokens of the enormous esteem in which he, and his library, are held by all the inhabitants of Northampton.

I did mention, didn’t I, that the first of the two salient adjectives describing our town is “quirky”?

(Next in Forbes Library: Volume 2, Northampton the Vibrant)

16 Responses to Welcome to Northampton: Forbes Library, Volume I