When we were still in the Berkshires and considering a move to Northampton, every person we mentioned it to had exactly the same comment: Oh, it’s so vibrant! It got so we expected it, and sure enough, it came every time: Northampton is so vibrant!

They didn’t mention quirky, which was perhaps the first attribute that struck us after the move. The vibrancy took a little longer for us to recognize —

For instance, the Forbes Library isn’t going to win any prizes for beauty, heavy as it is, and rather frowning in aspect: 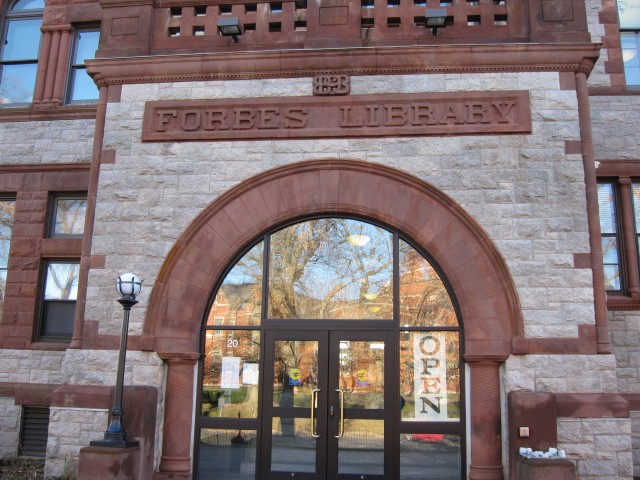 So it might be natural to expect a heavy, dullish, staid kind of place. But (as the French say) au contraire. Behind the fortress-like stones hums a veritable beehive of activity of every kind representing the larger diverse community that is Northampton itself. As Walt Whitman said, “I am not contain‘d between my hat and boots … I contain multitudes”; and so does the Forbes Library. (A literary reference seems appropriate when writing about a library.)

To begin at the top, perhaps, the towering staircase to the second floor brings you to the Calvin Coolidge Presidential Library and Museum: 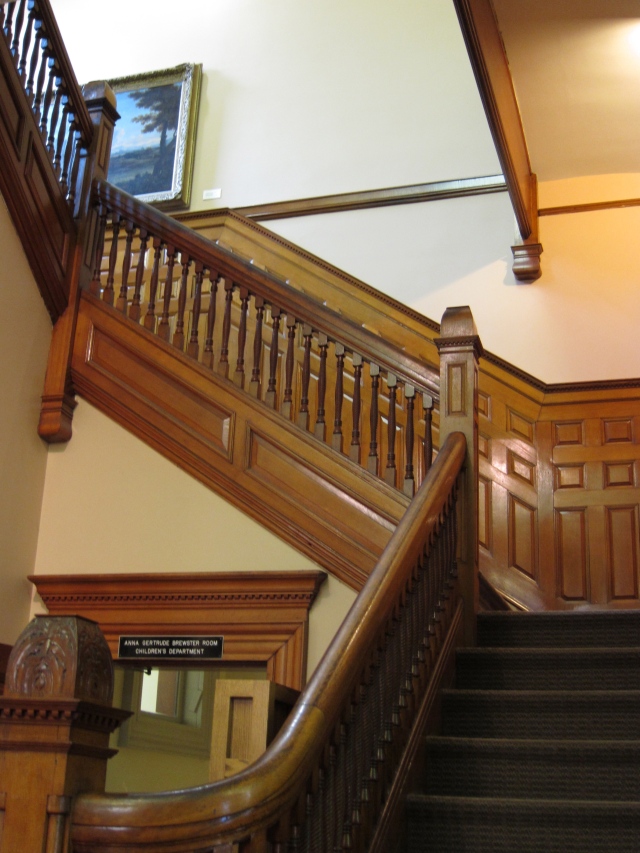 It’s the only presidential library in the U.S. contained in a public library. Coolidge was mayor of Northampton, governor of Massachusetts, and 30th president of the United States, and far and away our town’s most famous political figure. His nickname was “Silent Cal,” so don’t expect any flamboyance, unlike today’s current crop of politicians. His most famous saying was “The business of America is business,” which is true so far as it goes, and he in fact was a Republican and a conservative (back in the day when that word meant something vastly different from today). But the speech in which he said it ends like this:

We make no concealment of the fact that we want wealth, but there are many other things that we want very much more. We want peace and honor, and that charity which is so strong an element of all civilization. The chief ideal of the American people is idealism. I cannot repeat too often that America is a nation of idealists. That is the only motive to which they ever give any strong and lasting reaction.

How very New England it is, that blend of pragmatism and idealism, and how difficult it is to achieve a beneficial balance!

Political and social historians, among others, climb those steep steps for research. College and high school students — students being an overwhelming presence in Northampton and the whole Happy Valley — seek out the Forbes for their own research purposes, and find private nooks in which to pursue it, as, here, on the balcony: 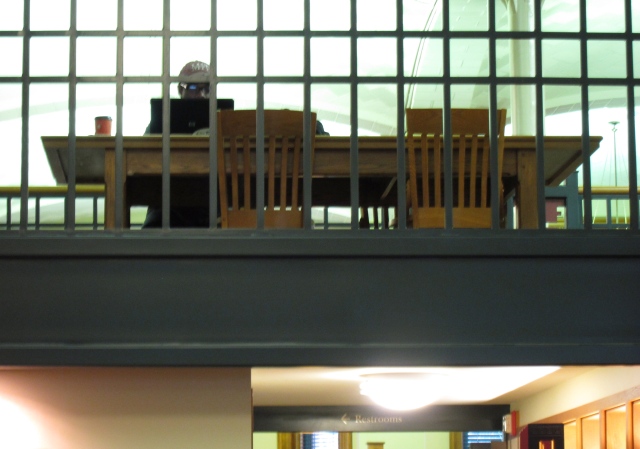 The opposite extreme, perhaps, is found in the basement, where among many other groups can be found the monthly meeting of Laugh for the Health of It. Don’t, please — laugh, that is. Unless you’re ready to come and try it. Frank and I did, and ended up refreshed, exhilarated, and exhausted! (You can see John Cleese at a meeting of a laughter yoga group in India, which is the parent of all such groups, right here:

Quirky enough for you? (If you think I’m showing you a photo of us laughing in the library basement, you’ve got another think coming!)

So from top to bottom, the Forbes contains multitudes. There’s a big Children’s Library, and it holds events for infants to preteens; there are book discussion groups of myriad categories, including mysteries, which I keep promising myself I’ll get to but haven’t yet; there are poetry groups and a writer’s room, and authors’ readings, and gentle yoga, and drop-in computer help, and a knitting clinic and the Northampton Playwrights’ Lab, to say nothing of the Hosmer Art Gallery with monthly-changing exhibits, and special performances of many kinds — and that doesn’t exhaust the list.

But always we come back to the business of libraries (as Silent Cal might have said), which is BOOKS. There’s a very large reading room, and many smaller areas scattered throughout the ground floor, and a vast double array of stacks, enough to keep the most inveterate bookworm well supplied. You can sit at a table, with or without your laptop, or you can find comfy chairs, like in this nook, to curl up in and read, or dream: 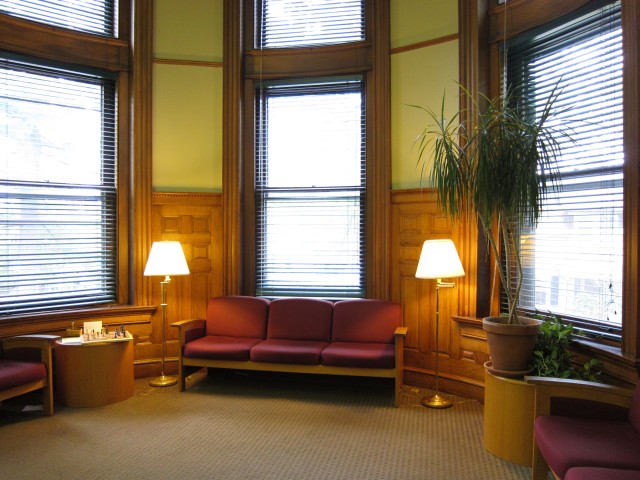 And not least of all, in a town where parking is a major headache, you can find a nice big parking lot behind the building. Yes, there are parking meters and fees, but in that perfect mix of practicality and idealism I spoke about, you don’t even mind  paying the 25 cents an hour, because where do you suppose your money goes? You got it! It buys BOOKS. 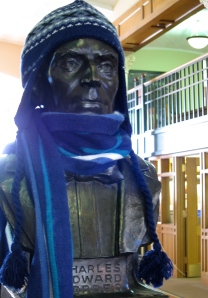 Lest you be under any impression that all this vibrancy somehow trumps quirky, well, you’ll be reassured when, on these December days with winter breathing down our necks, you’re greeted by Judge Forbes himself in bronze and warm wool: