The Jewel in the Lotus —

Anyone who’s flirted even mildly with Tibetan Buddhism knows this mantra for chanting: Om mani padme hum. What does it mean? “Hail, The Jewel is in the Lotus.” But what does that mean?

Even though I’ve chanted it myself (although I am not a Buddhist), I can’t tell you its deep meaning either spiritually or philosophically —  But I can tell you what it means literally, now that a kind and generous friend went miles out of her way to lead me to a lotus pond in full bloom, not in Tibet, not in Japan, but in my own backyard (almost): 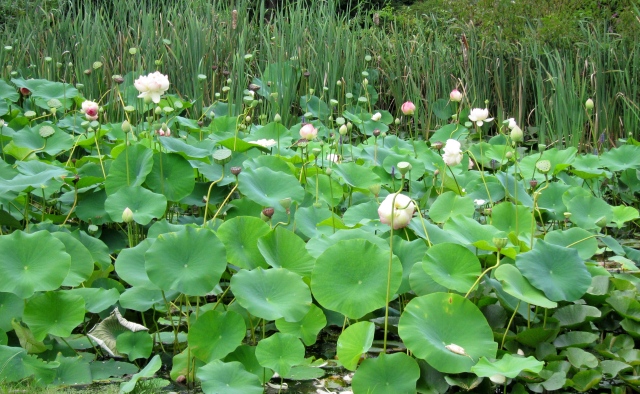 It’s late in August, the best time at least in these latitudes for the mystic blossoms of the lotus, jewel-like in their deep green setting: 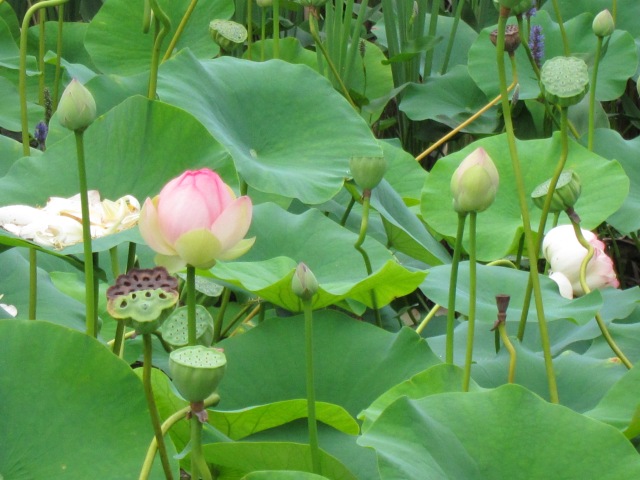 This is a better view of the characteristic lotus flower, whose roots are deep in the mud, but which pierces above its own leafy canopy to lift its flowers to heaven:

And the regal crown of the flower in turn becomes a throne uplifting manifestations of the Buddha and other Eastern deities, male and female, in myriad sculptures.  No wonder the lotus has come to be a symbol of purity, of the marriage of earth and heaven, the indissoluble union of baseness and nobility. The lotus says to us (translated into modern language), Ease up on yourself! You’re not meant to be a heavenly creature. You are of earth and you are of the spirit both, you are a jewel in a lotus with roots in the mud. Hail to the jewel in the lotus!

This is a print by 20th century Japanese artist Kawase Hasui:

A print of the famous Benten Pond at Shiba by Hasui has hung on our wall for decades now, long before we moved to Massachusetts. It has always been a promise of something beautiful, mysterious, and only to be found far far away. And now, it is fulfilled. Om mani padme hum!

39 Responses to The Jewel in the Lotus —