Getting By — With a Little Help from My Friends!

But a bigger part of me says, Hey, go for it! Bet a lot of people will feel the same — And anyway, what’s so bad about weird? So I’m listening to the big guy.

The most recent time it happened was the other morning, when I went to the dentist for one of my three-times-a-year-or-you’ll-lose-’em cleanings. The dentist is very nice, and all her hygienists are very nice, but the office, that’s another story. It’s located in what was once upon a time a flourishing silk mill, dating back to the late 19th century when someone had the bright idea of importing silkworm cocoons and starting a new industry right here in Northampton/Florence (two identities in a single town).

Well, among my quirks and foibles lurk some phobias. Two of them are a fear of heights, and claustrophobia. Do you begin to see where I’m going with this? Not yet?

The claustrophobia means that the teeny elevator is O-U-T. A bigger elevator, preferably one with a white-gloved operator (like in department stores in the olden days when I was a girl), or a huge spacious one for transporting oversized canvases in a museum is sometimes possible. On good days.  But this one? It’s like a coffin standing upright. No way.

Okay, what’s the problem with the stairs? I’m well used to taking stairs.  I tell myself it’s healthy exercise instead of having to admit it’s really about fear. But I told you this was a factory with high ceilings, so the three flights, which are divided so they’re actually double flights, are REALLY long. All right, so that’s even healthier exercise. Not a deal breaker. No, the finishing-off touch is that the tower is mostly glass-sided. Floor-to-ceiling glass-sided. The effect of this is that every other bend, when I come around to face this glass wall, visually I might as well be standing on the side of a mountain. Fear of heights, remember?

For some reason, that morning was really bad. Vertigo hit me even before I put my foot on the first step. Going up was bad enough, but as anyone who suffers from fear of heights and/or vertigo will tell you, coming down is worse.

As the hygienist poked her way among my teeth, and the dentist smiled at the antique filling beginning to crumble in my lower left, I was busy thinking of how I was going to get down and back to my car. Ask one of the receptionists to go down with me in the elevator? TOO embarrassing. But the stairs! How was I going to manage the stairs! And then I thought of something I’d done once before. It’s a long time ago now, but I never forgot it. I’d been sunk pretty deep in the blues, and feeling lonely and powerless to do anything about it. So I went for a walk (doing something is better than nothing, right?) and as I did, I found myself calling upon strong women I knew, strong women far away who were my friends. And suddenly there were these women, one by one,  striding down the street with me,  from the four corners of the earth a whole host of strong women, I could see their faces just as clear as clear, and I was no longer alone, but walking with a phalanx of admired powerful women.

It was amazing. An experience I never forgot. So that morning the thought once again came to me. I’ll call upon help! Who will I call upon? One of my oldest friends, who is just my age, and still goes climbing mountains. No fear of heights for him! Who could be better to climb down with me, encouraging, offering to lend me a hand. So I called upon him, on his clear head and his strength and his encouragement, and he lent it to me, and I strode down the stairs and down to solid ground and back to my car. Grinning.

As I said, I’d understand if you called me weird. It wouldn’t bother me at all, because, you know —- whatever works! The Beatles must have known, one of their most famous songs is really about this:

And here’s a gallery of a few of those friends, with whose help I manage to get by: 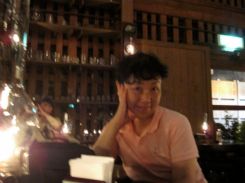 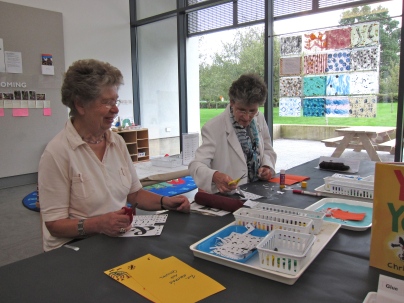 She came Out of a Blog! 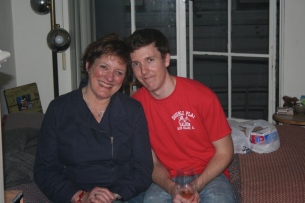 On the Left Coast

The One and Only

37 Responses to Getting By — With a Little Help from My Friends!