“It ain’t over till the fat lady sings….”

It’s a great phrase, isn’t it? It references what used to be the stereotypically overweight sopranos of Grand Opera. (Since the advent of the Metropolitan Opera’s HD television simulcasts, we’ve been getting glamour girls instead.) 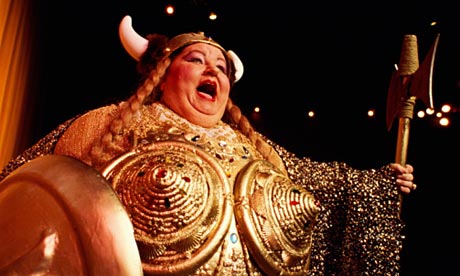 In the imagery of the final opera, Götterdämmerung, of Richard Wagner’s opera Ring cycle,  the “fat lady” is the valkyrie Brünnhilde. She’s traditionally presented as a very buxom lady with horned helmet, spear and round shield. Her big closing aria lasts almost twenty minutes and leads directly to the end of the opera. As Götterdämmerung is about the end of the world (or at least the world of the Norse gods), it truly is all over when the fat lady sings.

A sports journalist, Ralph Carpenter, in an inspired moment (March 10, 1976, at which time it is generally warm in Dallas, Texas where he was) wrote it about an athletic contest. Meaning, “Don’t count your chickens till they’re hatched” (circa 16th century) or “Hey, guys, it’s March 22nd, it’s springtime, isn’t it?” (March 22, 2014, said by me and countless citizens of Massachusetts in New England, only to discover how delusional we are).

We are WAY overdue for it to be over, it being this winter that never ends. But the Fat Lady shows no signs of opening her mouth to sing. She’s sulking. Or she’s pissed. Or she’s got PMS. Whatever. It’s pretty obvious, at least to me, that the Fat Lady is an unkinder, ungentler aspect of Mother Nature, the Mother of Us All. And she’s really mad at all of us kids —

I don’t know what your mental image of Mother Nature is. Mine is, or used to be, of a kind, green, gentle, caring lady, something like this. (Wired in a modern fashion, to boot.) But relentless cold and ever-falling snows with no end in sight have ground me down, along with my image. She’s two-faced, this lady. Well, I guess she’s entitled. We’re all two-faced, to some degree. But this winter she’s perpetually been wearing another face, a face not even so benign as the image opening this post. Nope. And what can we do to soften her wrath? I don’t know! Here in Northampton, where they really know from green, we already recycle, solarize, bike ride, pretty much you name it. But her wrath continues. Here, then, is what I imagine as the current image of Mother Nature, March 2014: 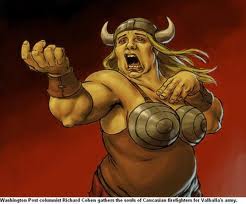 And here is my final plea: We’re sorry! Please, please, let’s hear it from the Fat Lady!