Who would have thought that this dreamy camellia would rouse thoughts of war and peace for me?

Her photo is only one among the many I snapped at the Spring Bulb Show at Mount Holyoke, and — I would have said — one of the least of them. A hundred flowers had more presence than this one, brighter color, more exotic form. But something about her kept my finger away from the delete button. The softness of the flower? its almost translucent quality? the gentle roundness of the petals?

People of my age, wherever in the US they lived, shared one formative experience about the South and the Civil War. The towering Civil War film epic, Gone With the Wind, based on the best-selling novel of the same name by Margaret Mitchell, first opened in 1939. It ran a staggering 238 minutes, and held viewers riveted every instant.  Although I would have seen it later on in my pre-adolescent years, and probably missed much of its adult meaning, I was already old enough to be profoundly moved by the love drama of its main characters.

Anyone who knows about it will immediately identify Scarlett O’Hara, that stunningly ineffable egoist, as its heroine. You’re certainly supposed to do so. All the publicity and hoopla belonged to Vivian Leigh as the predatory Scarlett:

But I’ve always had my own, perhaps more boring, more conservative preferences. My heroine was Melanie Hamilton Wilkes, friend and foil to Scarlett O’Hara. Melanie was played by a quiet, demure Olivia de Havilland.

See, her dress even looks like a camellia! The intentional contrast is made clear in this still from the film:

Here’s the gentle pink of the camellia contrasted with the glamorous red of the Scarlet(t) woman. In the same way, the forceful and dashing Rhett Butler of Clark Gable is meant to overshadow that consummate Southern gentleman Ashley Wilkes, portrayed by Leslie Howard. My mother, along with thousands of American women, sighed over Clark Gable. Me, true to form, I pined for Ashley.

So you see how many long ago emotions were stirred by the photo of the camellia, especially when I hunted through my archives for a flower that might represent Melanie’s predatory rival. And here’s what I found: 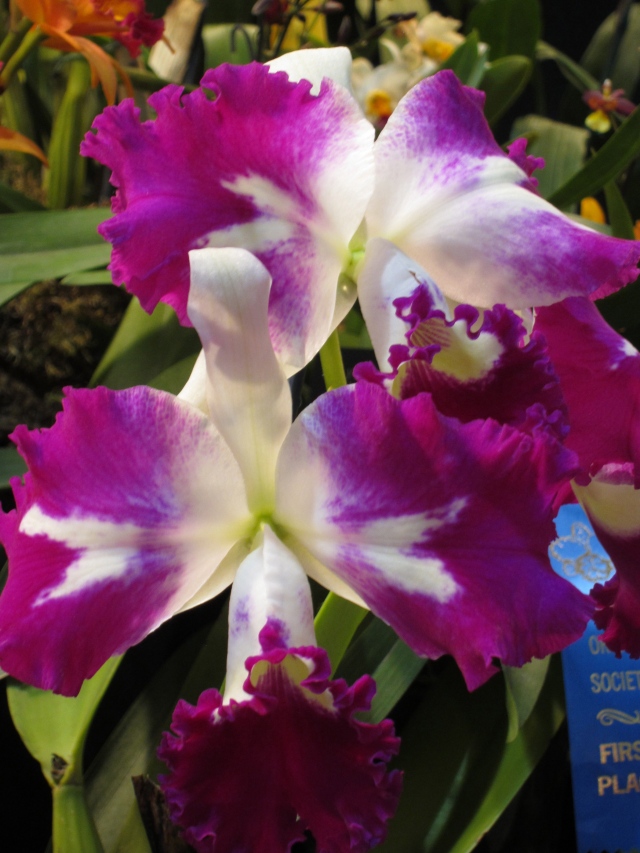 Showy, glamorous and expensive, this cattleya orchid took first place at the Amherst Orchid Society’s show a while back. My tastes haven’t really changed in all those intervening decades, though. To me, the prize winner is gaudy and vulgar and predatory, just like Scarlett O’Hara. Give me the camellia any day!

This entry was posted in Memory, Personal Essay and tagged Civil War, Flowers, Gone with the Wind, Memories, Movies, Orchids, War and Peace. Bookmark the permalink.

14 Responses to TODAY’S PORTRAIT: Flowers of War and Peace