Going for the Triple Crown —w

I married a thoroughbred.

I always knew it, but past events have really tested him, and so far he’s flown past them all like American Pharoah on his way to the Triple Crown, a bighearted thoroughbred all the way.

Of course the Triple Crown races are for three-year-old racehorses, and the Hub is 88. But the races  he’s been entered in lately (willy-nilly) are precisely those challenging folks inhabiting high human numbers. Oddly enough however, or maybe not so odd, they call for a lot of the same qualities in people as in racehorses. The Hub, like the Pharoah, is friendly, kind, cheerful, hard-working, persistent, and in it for the long haul.

Remember that childhood storybook favorite, The Little Engine that Could? “I think I can, I think I can” has pretty much always been the Hub’s mantra. He married a world-class pessimist, but has never it let it faze him, dull his own optimism, or cause him to doubt. (That, in itself, is a cause for congratulation.)

First race: while waiting for scheduled major surgery at the end of May, he was bushwhacked by an early Sunday morning collapse. He was transported by 9-1-1 EMT’s to our local hospital, where, the next day, he received a pacemaker. Sailed through the procedure fine, but then was hammered by post-op delirium from the anesthesia, an ever-present hazard for those in the “elderly” category. After mostly pulling out of that (a phenomenon which can persist erratically for quite some time) he was making jokes about at last becoming a Bionic Man.

The hot and cold Visiting Nurses that streamed through our doors in the following weeks, exuded confidence, competence, and good cheer. They ministered untiringly to the Hub, and incidentally saved my life.

Next up: the big operation itself, a ureteral nephrectomy. (That’s the removal of a ureter and a kidney, all dressed up in Latin verbiage.) A Big Deal, yes. Even the urologist-surgeon, a world-class optimist like my husband, allowed as how this was a really big deal. A slog, like the muddy course in the pouring rain that was the Preakness race, failed by almost all except, of course, American Pharoah. He sailed through the second challenge race. Like the words of “Fugue for Tinhorns” in Guys and Dolls, “likes mud, likes mud.” So did the Hub.

Here he is, the morning after the surgery, receiving a kidney to replace the one he’d lost, courtesy of our daughter, the Shopper Extraordinaire, (son cheering from cyberspace): 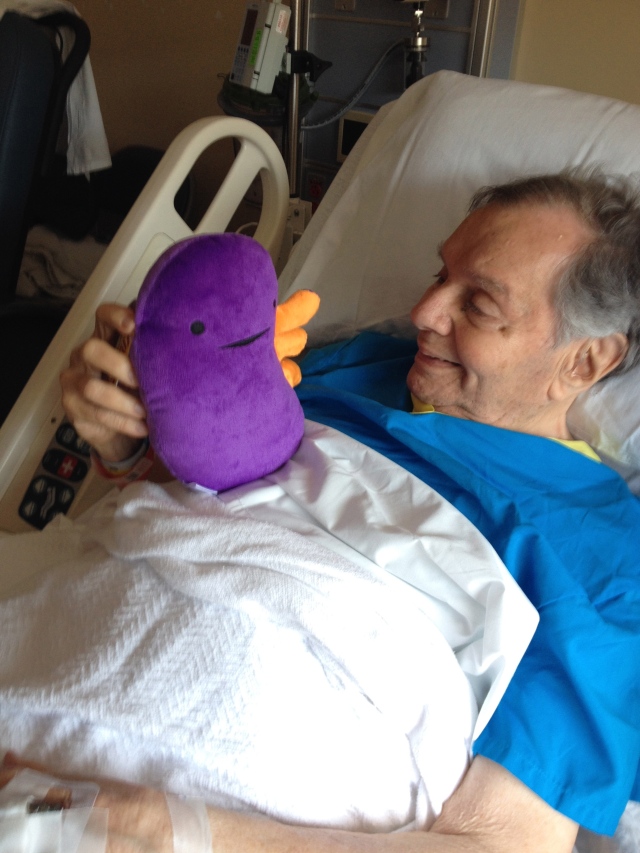 In case you doubted, you can truly buy anything on the Internet.

And here he is,  five days after the Big Deal operation, sitting up in rehab, although not exactly taking nourishment. (His normally great appetite has so far been playing coy and hard-to-get; but we’re assured that’s a passing phenomenon.):

(He doesn’t like that one so much, but I do because it’s a speaking likeness))

And here’s where I want to express our  gratitude and our thanks for all your messages. What with the increased demands of “ordinary” every day life, there’s no way I’ve been able to tender anything resembling individual appropriate thanks. I hope you understand. I’m dancing as fast as I can. So I’m taking this quick breather to thank each and every one of you. Your cards, prayers, messages, wishes, vibes, thoughts — they’ve all been of immense support, more than you can know. Please, keep them coming for this longest race of all!

Last night watching TV in the Hub’s room in rehab, we cheered and laughed and exulted in American Pharoah’s climactic win. The whole of Belmont was pulling loudly for him. Thanks, everyone, for pulling for us — and for keeping on keeping on!

43 Responses to Going for the Triple Crown —w