Of Making Many Books, There is No End — or Reward?

Posted on May 17, 2013 by Touch2Touch
“Of making many books there is no end, and much study is a weariness of the flesh.”

It was that way right from the beginning, I’m sure. Carvers in stone, makers of runes,  scribes in papyrus and parchment, right up to workaday paper — Hebrew, Greek, Latin, English — Making books is weary WORK, not glamour. Don’t take my word for it; here is Gabriel Garcia Marquez, author of, among many other long works, One Hundred Years of Solitude and Love in the Time of Cholera:

“Ultimately literature is nothing but carpentry. Both are very hard work. Writing something is almost as hard as making a table. With both you are working with reality, a material just as hard as wood. Both are full of tricks and techniques. Basically very little magic and a lot of hard work involved.”

Carpentry! But people persist in regarding writing books as a high road to fame and fortune. Hah!  The Biblical quote called it more accurately: there is no end to the making of, not only fiction, but books about (as here, the beginning of my shelves on music and cooking) everything under the sun. There are books by unknown people — that’s most of them. But some of these are books by friends (on the lower left). On the right, some of the favorites that make every cut, however we try and clear out our stock. We cannot bear not to keep these few. 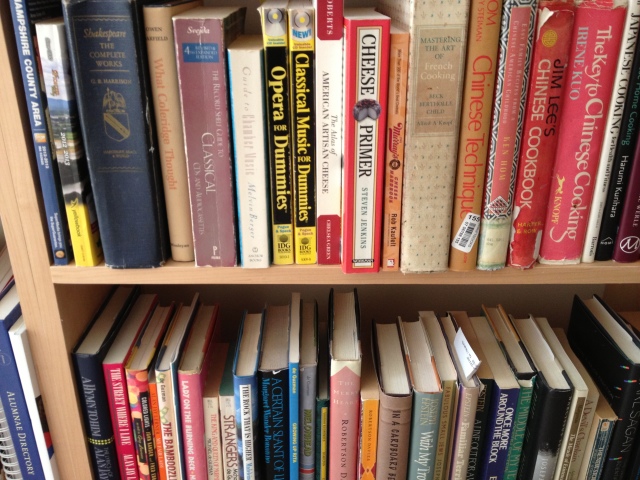 (A Side Note: Why so many books on booklovers’ shelves?  I have a theory. I am convinced that, in the middle of the night, books hop down off their shelves and mate, which is why people always find their shelves overflowing all the while swearing, truly, I did NOT buy all of these! )

I am also convinced that everyone is convinced that they “have a book in them.” If not several books — Writing does seem beguilingly easy, doesn’t it? Just put one word after another. We’ve all been doing that since infancy! There is a catch though, which occurs very soon after sitting down at a desk. Here is Stephen Leacock, the Canadian humorist, in this case, the Canadian truth-teller:

“Writing is no trouble, you just jot down ideas as they occur to you. The jotting is simplicity enough – it is the occurring which is difficult.”

The lure probably begins with its simplicity. No special equipment required. A pencil or a pen and a blank piece of paper. Which, maddeningly, remains blank. Or is rapidly scribbled over with words that, read the next morning, are at best nothing much, at worst, drivel. Because what no one considers in this alluring prospect is the rewriting. But it’s the essence of writing: rewriting. Ernest Hemingway, who never wasted words, said it best:

“The first draft of anything is always shit.”

Not that I expect anything I’m writing here to innoculate anyone against the writing bug. If you like hitting your head against a stone wall, if you like to dream The Impossible Dream, you’ll go to it anyway. I did. And what’s more, I’ve been published. By big name hard copy publishers. Fame? Have you ever heard of my books? Fortune? The 1% never included me in it!

My two books are on these particular shelves, Going to Jerusalem (in a luxurious leather binding that was a gift from publisher Simon & Schuster, although I’ll bet they don’t do that these austere days) and Convergence (Doubleday). There’s a book about Brother Roger of Taizé, which I translated from the French, and copies of a “little” magazine, The Berkshire Review, which published some of my stories. My friend Madeleine L’Engle, whose Penguins & Golden Calves is only one among her countless works of science fiction and memoir, is here to remind me of scale. Natalie Goldberg and Brenda Ueland wrote two of the best, and my favorite, books on writing. The other books hanging out on the same shelf deal with creativity of various kinds, and with motivation and balance and psychology, and are by authors as distinguished as Rollo May and Viktor Frankl. At the right of the photo, somehow fittingly, is If You Meet the Buddha on the Road, Kill Him, by Sheldon Kopp.

And was it, in the end, worth all the time (years, sometimes) and trouble? Hard to say. Simply put, it’s what I did, and do. Words are my instruments, my playthings, the iridescent shimmering bubbles that I blow. And I’m stuck with that! There really is a reward, though, even if the fame and fortune and glowing critical reviews never materialize. It’s an unexpected reward, stated clearly by the poet C. Day Lewis:

So there you are —

Do you want to understand better? Yourself? Others? The world? Life? Truth? Write as long and hard and truthfully as you can, and that’s what you can look forward to. Believe me when I say I only set out this morning to write a funny little post about there maybe being too many books in the world. I didn’t expect to discover anything, but I was ambushed and surprised. And that, my friends, is a reward of writing.

123 Responses to Of Making Many Books, There is No End — or Reward?